Must do and see in Trnava

Trnava is town in western Slovakia. This town is only twenty nine miles away from Bratislava. It has little more than sixty five thousand and six hundred inhabitants.

This Renaissance building is dominant on the Trinity Square. It was built in the sixteenth century to serve as an observation post. The observation gallery is twenty nine meters above the ground and the overall height of the tower is fifty seven meters. The baroque cupola is decorated with gilded statue of Virgin Mary. The tower clockwork was constructed in eighteenth century. The bells dates from 1692.

The Cathedral is the first early-baroque building in Slovakia and it ranks among the most beautiful in Europe. It was built by the Italian architects Pietro and Antonio Spazzo. It used to be part of the University complex. The main artifact in the church is the original wooden Altar from seventeenth century. The main painting of the altar shows the Baptism of Jesus Christ, a theme taken up by further scenes from the life of St. John the Baptist painted in cartouches on the ceiling. Under the church there is a crypt where members of the Society of Jesus are buried as well as members of Palatine Nicholas Eszterházi’s family.

It is one of the few preserved oldest brick fortifications in Slovakia. It enclosed an area of fifty six hectares which made Trnava one of the largest towns in the thirteenth century. 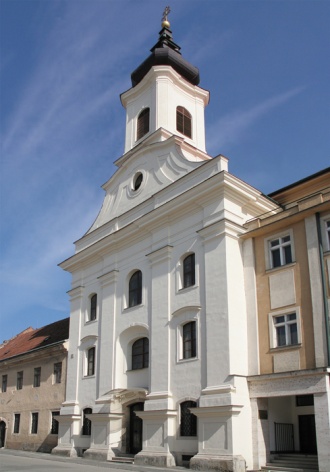 The church was built in the end of the eighteenth century. The one-nave church has an oval ground plan that is very rare in Slovakia. In the western part of the church visitors may see painting “Christ on Olive Mountain”. Under the Virgin Mary Altar there is a decorated tin coffin containing the relics of the Holy Martyrs of Košice.

This church was built in the fourteenth century. This is a gothic three-nave basilica with a two-tower frontage and baroque chapels. Church altar is in the early baroque style and it dates from seventeenth century. In the baroque Virgin Mary of Trnava Chapel is her gracious painting. This painting is the reason why Trnava became a well-known place of pilgrimage. In the side chapels are precious renaissance and baroque epitaphs of Esztergom archbishops.

This town was first mentioned in documents from thirteenth century. It is a very popular tourist location.