5 things to do and see in Trencin

Trencin is the ninth biggest town in Slovakia. It is located in the north part of the state near the border with Czech Republic. Trencin has approximately fifty six thousand and eight hundred inhabitants.

The Trencin castle that dominates the 'whole city offers a beautiful view of the city and is definitely one of the most beautiful in Slovakia, well preserved dates from the thirteenth century, although later interventions has had renovations until the present form, all' inside of the same is preserved a stele with an ancient Roman inscription dating the site as very old, in the castle you can visit a museum on the Trencin region where it is located. Trencin Castle is open throughout the year together with the museum.

Today, this building houses is the museum. It originally served as a the city palace of the Ilešházis and is located near the Upper city gate. The building was built in the seventeenth century. It was reconstructed in the late Baroque style in the second half of the eighteenth century.

5. House of the City's executioner

The house dates back to mid sixteenth century. It is located in the oldest part of the Trencin. In the seventeenth century, according to the legend, it served as the City’s executioner’s home as well as a prison.

The Renaissance Parish stairway was built in sixteenth century as a defense passageway. The stairways were serving the members of the city garrison to defend part of the city walls from the St. Michael's Carner (bone house) to the castle. At the same time it also served as an access road to the City armory, built in 1565 next to the carner. The stairways were damaged by fire in the eighteenth and nineteenth centuries. 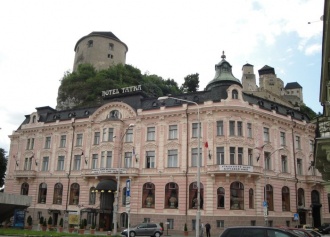 This building was built by Baron Armin Popper in the beginning of the twentieth century together with other elements of the Secession style. It was built according to a design by E. Bleier. The hotel was named upon the Emperor Francis Joseph’s wife Elizabeth („ Erzsébet“). Roman inscription in Hotel Tatra is the most important preserved Roman epigraphic monument in Central Europe. It is describing conflicts between the Roman Empire and tribes around the Danube River in the last third of the second century.

This town is very old. There are traces that it was established in the times of the Roman Empire. Trencin is a very popular tourist destination.