Must do and see in Poprad

Poprad is the town located in the northern Slovakia near the Tatra Mountains. It is located next to the Poprad-Tatry Airport. It has fifty five thousand inhabitants. 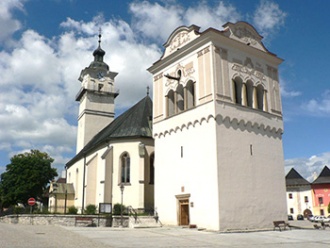 The Roman Catholic St. Egidio Church is the most valuable historical monument which is located in the town centre. Its origin dates back to the second half of the thirteenth century. In 1994 the church´s nave on the Early-Gothic portal next to the southern gate to the church were reconstructed. In 2008 the organ was built in the newly reconstructed eighteenth century Baroque organ.

3. Our Lady of Sorrows Cathedral

The church was raised in three years according to design by Ing. G. Schreiber. The cathedral was consecrated by His Excellence Ján Vojtašák, the Bishop of Spiš, on September 8, 1942. On the main altar there is the sculpture of Our Lady of Sorrows and the sculpture of St. John the Apostle. Both sculptures are made from Carrara marble, and they were created in 1949. The sculpture of Mary of Magdala from 1956 was made by Master Blažek. Coloured windows in the sanctuary were created according to a design by A. Mašek and they are describing some events from the Christ´s life. The Calvary from artificial stone is the work of Master Blažek and it was installed in 1957. The organ was raised in the second half of the twentieth century. The church is built in a modern Functionalist style.

The origins of the current Podtatranske Museum in Poprad date back to the second half of the nineteenth century. It was established as an addition to the activities of tourist association and continuing interest in the natural environment and cultural and historical monuments in the local and Tatra region. 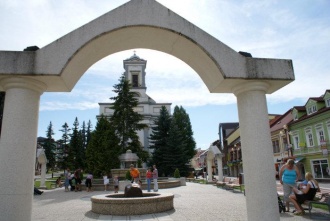 The church of the Evangelic Church of Augsburg confession was built in 1829, in the Classicist style, according to projects of Ján Fabrici. The classicist altar was raised around 1838. In the church is Ondrej Fabrici´s tombstone from 1830. He was a priest, religious writer and noble, who has been living and working in Poprad for forty one years. 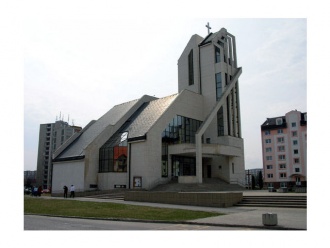 On the right side of the church, there is St. Joseph Chapel. The foundation stone was sanctioned by John Paul II the Pope in Bratislava in 1990. The construction was conducted in the late twentieth century. The church was consecrated on June 26, 1998. The structure has an iron-concrete skeleton. The basement of the church has extensive space for various symposia and lectures. There is a large congress hall, room for religious teachers and library with internet.

This town is very old. It was first mentioned in the documents from the middle of the thirteenth century. Poprad is famous by its ski resorts and its sacral monuments.