What to see in Bremerhaven

Bremerhaven is a city at the seaport of the Free Hanseatic City of Bremen, a condition of the Federal Republic of Germany. It structures an enclave in the condition of Lower Saxony and is placed at the entrance of the River Weser on its eastern bank. Despite the fact that a moderately new city, it has a long history as an exchange port and today is a standout amongst the most paramount German ports, assuming a pivotal part in Germany's exchange.

Bremen pinion or Bremer Kogge is an overall safeguarded wreck of a geartooth dated to 1380, found in 1962 in Bremen. Today it is shown at the German Shipping Museum in Bremerhaven as one of the primary gimmicks. Three almost indistinguishable copies of this tooth have been assembled: Ubena von Bremen, Hansekogge and Roland von Bremen. The quest for more wreck parts proceeded until July 1965 and yielded in excess of 2,000 individual bits of the boat. The pieces were exchanged to the German Maritime Museum for conservation.

The German Maritime Museum is called the Museum for Oceanography and Fishery, has an aquarium, in the Hanseatic town of Stralsund is a historical center, in which sea and oceanographic displays are shown. This is very real oceanic historical center, there are three different locales, the Ozeaneum, opened in July 2008, the Nautineum and the Natureum. The primary house is found in the lobby of the previous St. Catherine's Church. The Maritime Museum has numerous shows to see.

The German Emigration Center is an exhibition hall found in Bremerhaven, Germany devoted to the historical backdrop of German migration, particularly to the United States. It is Europe's biggest subject gallery. The exhibition hall additionally gives access to databases of migration records. 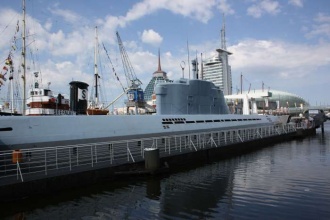 Wilhelm Bauer (initially assigned U-2540) is a Type XXI U-pontoon of Nazi Germany's Kriegsmarine, finished right away before the end of World War II. It was abandoned toward the end of the war. In 1957, it was raised from the seabed off Flensburg Firth and restored in the German Bundesmarine in 1960. Development of U-2540 started on 28/29 October 1944 by Blohm & Voss in the Hamburg-Finkenwerder.

The Bremerhaven Radar Tower is a 106 meter strengthened solid tower found in Bremerhaven, Germany. The tower, which was built somewhere around 1962 and 1965, obliges various transmitting plants for sea radio purposes. A review stage is arranged at the 60 meter level, and is available to the general population.

Bremerhaven has historic value for german people and it is recommended to visit it if you have a chance.