What to see in Bergisch Gladbach

Bergisch Gladbach is a city in Germany, in North Rhine-Westphalia. It is the capital of the district of Rheinisch-Bergischer Kreis. According to the state in 2007, Bergisch Gladbach has over 105,000 inhabitants. The municipality is located on over eighty square kilometers.

Das Alte Schloss Bensberg is also known as Bensberg castle. It is a medieval castle in the district of Bensberg. It was built according to the plans of the architect Gottfried Böhm Bensberg Town Hall. According to the results of archaeological findings from previous years, castle Bensberg dates from the 12th century. It was owned by the Landgrave Ludwig I of the House of Landgrave of Thürigen.

3. The Evangelical Church of Grace 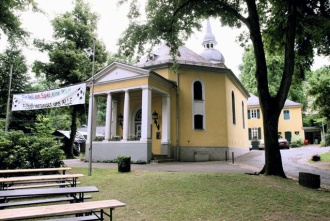 The Evangelical Church of Grace is a listed church building in Bergisch Gladbach in the Rheinisch-Bergische District. It is a building of octagonal shaped Dutch style. Protestants build a church in 1776.

The Albertus Magnus Gymnasium has its seat in Bergisch Gladbach. Leopold Graf von Spee had idea about establishment of a Catholic private school for boys. Two classes that were initially run as a private school started. School has interesting history and you can learn all the facts from school documents.

The Catholic parish church of St. Lawrence is a listed church building in Bergisch Gladbach and it was first mentioned in 1282 as a parish church. The current neo-Romanesque basilica in three different phases. Church hall can be seen at the western tower.

The Bergisch Gladbach station is a railway and the traffic control center of the city Bergisch Gladbach in North Rhine-Westphalia. It goes from Cologne to Dusseldorf S-Bahn. The station falls under the category 6. and has a total of seven tracks.

Bergish Gladbach is a town with so many things to visit, do and explore. Come back if you like.